Age, Like An Ultra Marathon, Is Just A Number: Part Two 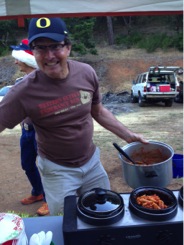 In part one we learned about John’s frustration with aging and how he didn’t expect to see much of a difference with any exercise regimen he tried, even Empowered Fitness. John’s mid-life funk was pervading his state of mind. At age 58 he joined Empowered Fitness.

John noticed a difference in his health and physical fitness within a month of joining EF. He had no issues staying committed; citing the fun classes, the welcoming and supportive environment, and the trainers who were so aware of his well being. He lost 20 pounds without even trying. John also found that working out at Empowered Fitness was both psychologically and emotionally uplifting. It started to improve his attitude as much as his fitness.

Six months later, John ran his first marathon. He was hooked. Both the beautiful scenic locations of his runs and the solitary challenge of trail running appealed to his personality. His initial low expectations for the future of his health were blown out of the water. John was no longer angry about getting older; he was excited by and proud of his progress.

But he didn’t stop there. Six months after his first marathon, John decided to become an ultra marathon runner. He ran his first 50k two years after joining Empowered Fitness and hasn’t looked back. John’s longest race to date has been a 50 mile run through the mountains of Oregon.

John attributes his success to the supportive and constructive environment at Empowered Fitness. He still attends classes every week. This September, his 3rd year anniversary with Empowered Fitness, John will be running a 100 mile race at 60 years young. He says he definitely has a healthy dose of fear and knows he might not finish, more than 10% of the runners don’t, but is definitely looking forward to the challenge.

Congratulations on your success John! We can’t wait to hear how the 100 mile race goes!