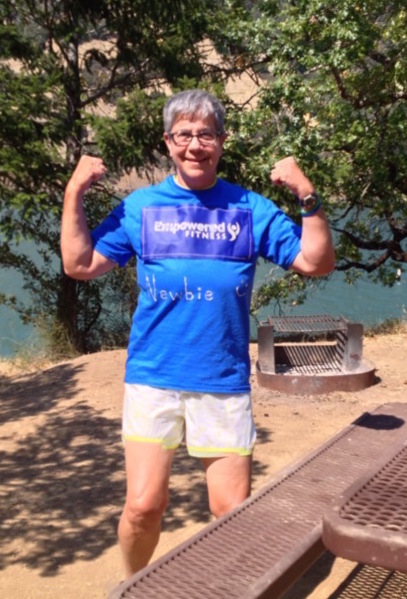 In part one Cathie continued her lifelong negativity cycle with her weight. She had become lax on Weight Watchers and didn’t feel like her running regimen was making a difference. In short, Cathie was ready to give up.

Cathie was pretty much resigned her to fate when her partner Lori convinced her to join Empowered Fitness. But Cathie still wasn’t completely onboard. She had an inherent aversion to strength training and felt that cardio was the way to go. She was also worried about looking silly in front of others in a class. When she had her first meeting with Diana, owner of Empowered Fitness, and Diana said that they ran at most one mile per workout, Cathie scoffed. How could one mile help her get over this health hurdle?

Boy, was Cathie ever wrong. After the first class she realized that her physical fitness definitely wasn’t where she thought it was. But she didn’t feel discouraged or like she was failing, the exact opposite! The trainers’ attention to her unique challenges helped her to feel like she was trying her hardest, no matter what pace she was going.

By doing the mixed strength and cardio workouts with Empowered Fitness, Cathie started to drop inches. And after participating in the Empowered Fitness nutrition program Cathie lost 12 pounds! It seemed like strength training might have been the missing ingredient in her fitness regime.

Cathie’s negative self-talk habits also got a makeover. Everyone did the exercises at their own pace without a negative pile on by the trainers or the other members, which meant that no one felt discouraged to quit. The Empowered Fitness members cheered each other on and Cathie joined in. She stopped being her own worst critic and learned how to face her challenges at her own pace without giving up.

Since joining Empowered Fitness two years ago Cathie says that she has become so much more confident in her abilities. Her physical fitness has improved immensely and so has her outlook on life. Best of all, Cathie is sharing her Empowered Fitness experience with her students. She teaches EF-style exercises to her fourth graders during P.E. Surprisingly, burpees are the crowd favorite! And Cathie continues to set new goals for herself. Her next triumph will be the monkey bars, which she practices every recess.

Congratulations on your success Cathie!