How to Lose Weight in Italy: Part Two 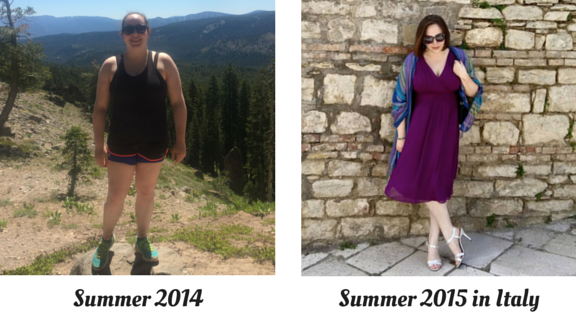 In the first part of Mackenzie’s Empowered Success story we learned about her struggles with stress eating during college, her efforts to change her habits, and the eventual stall in her progress that made her turn to Empowered Fitness. In this post we will learn about Mackenzie’s success with Empowered Fitness and how she went on to lose weight while on vacation in Italy.

Mackenzie started the TakeDown Challenge at Empowered Fitness thinking she knew a thing or two about nutrition. More fruits and vegetables, less bread, cut the sugar. However, no matter how often she repeated that mantra, Mackenzie would still eat junk food during times of stress. Empowered Fitness changed all of that.

The TakeDown Challenge is built around a schedule: four meals a day, every four hours. (link TakeDown Challenge posts) Every person eats a certain number of units, determined by their height, weight, and body fat percentage. The units are made up of three macronutrients: protein, carbohydrates, and fat. The system may sound simple, but it changed Mackenzie’s eating habits completely. She was so full for the first week that she couldn’t finish most of her meals. And yet, Mackenzie started to lose weight. It turned out she had slowed down her metabolism so much with her wonky eating that upping her exercise wasn’t making a difference anymore.

Three weeks into the TakeDown Challenge, Mackenzie had lost 12 pounds. And now came the hard part. She was off to the land of pizza and pasta for almost a month. Mackenzie was really looking forward to spending time in Rome, Italy with her fiancé, but it felt like she might lose all of the ground that she had gained.

But Mackenzie continued to follow the units, which wasn’t hard with all of the fresh, delicious food available in the supermarkets. Even having to eat out with friends at least once a week, she watched what she ate and made sure to have as many fruit and vegetable carbohydrates at home to make up for the typical restaurant fare of pizza and pasta. Even more importantly, she didn’t blame herself if she ate too much at a meal. She remembered what she learned at Empowered Fitness: one meal at a time.

Exercise was another story. It was usually 85 degrees and over 90% humidity, not exactly conducive conditions to her running regimen. Her suspicions were right, a few days later when she tried to go running she could barely breathe and doing an easy run felt like torture.

So, Mackenzie improvised. Mackenzie took every opportunity to walk wherever she went, whether it was a trip to the grocery store or a mile or two to meet a friend. The walking combined with the heat was more than enough cardio to make up for any dinners that went slightly overboard.

After three weeks Mackenzie returned to California. She would have just been happy if she hadn’t gained back the weight she had lost before her vacation, but stepping on the scale turned out to be a pleasant surprise. Mackenzie lost 4 pounds in three weeks!

The Empowered Fitness philosophy helped Mackenzie to not only kick her stress eating habits but also continue to improve while in Italy. Losing weight on vacation doesn’t have to be a pipe dream, learning the right way to eat and exercise with Empowered Fitness is all it took!

Congratulations on your success Mackenzie!